Vangalapudi Anitha Biodata: Anitha (TDP) is an ex-MLA of Payakaraopet Assembly Constituency in Visakhapatnam district of Andhra Pradesh. She is currently representing as TDP (Telugu Desam Party) official spoke person and president of women wing. In 2019 general elections, she lost to Taneti Vanitha. 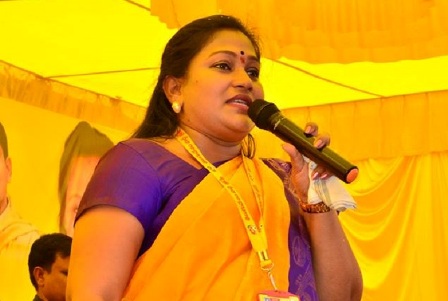 TDP leader Anitha is the president of TDP women's wing which is "Telugu Mahila". She is one of the powerful spokes person in Andhra politics. Moreover, she actively participates in TV debates and press conferences. Anitha Vangalapudi did her MA and B.Ed from Andhra University, Visakhapatnam. Before coming to full-time politics, She worked as teacher of APOSS (Andhra Pradesh Open School Society).

In 2014 general elections, Anitha Vangalapudi elected as an MLA from Payakaraopet assembly constituency in Andhra Pradesh. This locality come under Scheduled Caste reserved constituency. In the last general elections of 2019, She contested from Kovvur and lost to Taneti Vanitha of YSRCP. However, she is actively moving forward in politics by playing as a key member in TDP.

She is the current Telugu Mahila State President and official spokes person from TDP.

Anitha is one of the post graduated and highly educated person among AP state political leaders. She did M.A.,LIT (Master of Arts, Andhra University, 2009), M.ED.(Master Of Education, Ambedkar University, 2011)

She hails from Indian Hindu family of SC caste. Her sub-caste is Madiga (SC).